For a change, decided NOT to go on a long road trip on a long weekend. Instead, we decided to explore places in Mumbai. And so, on a wet saturday morning, M and I set off, to look up spots in South Mumbai. The first stop was the Church of St John the Evangelist, popularly known as Afghan Church.

Tucked away in a quiet corner of Colaba, close to Navy Nagar, Afghan Church is a Presbyterian Church built to commemorate the dead of the 1838 Afghan War. The imposing spire, rising to a height of 60 mts that was once visible to ships docking in the harbour, is now dwar 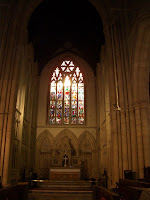 fed by high rises all round. Surprisingly, the church itself is in a derelict state, opening only for mass on sunday mornings. Since we went on a saturday, the church was sadly, closed to visitors. There wasn't even a caretaker to be found. The precincts were immacu


lately kept, and the facade was imposing. Since the main entrance was locked, we missed seeing the famed stained glass windows - apparently the largest in India. Will come back on a sunday morning post monsoon and post pics. Pic courtesy here: googlemaps/panoromio
From the Afghan Church, we proceeded to Kala Ghoda, to the Jehangir Art Gallery. There were several solo exhibitions on, mostly abstract paintings. Also on display were sculptures by an artist who works with mixed media: fibreglass, brass and metals, clay etc., I am sure there are people that appreciate modern art, but sadly we were not those. Hence a quick tour and exit, to Samovar Cafe.
Samovar is a quaint cafe attached to the Art Gallery, immortalised in the Basu Chatterjee movie Chhoti si baat, starring Amol Palekar, Vidya Sinha, Ashok Kumar (as the unforgettable Col. Julius Nagendranath Wilfred Singh) and Asrani. An open corridor running down an entire length of the gallery building is cloistered and converted into a narrow cafe, with rows of chairs on either side of the aisle. Since it was early noon, there wasnt much crowd save for a solitary foreign tourist. Sadly, the menu did not feature chicken-a-la-poos, though it did list kheema paratha and dahi vada. The menu had several delights for the maansaahaari, such as mutton samosa, chicken patty etc., We settled for the spicy cheese-veg roll, veg sandwich and the mango lassi. The staff were extremely courteous, efficient and quick, though on a lazy sunday morning, I'd rather they were slow! The ambience was enhanced by the background music - a collection of fusion music titled Chitra, by Venus. The staff even obliged us by getting us the CD cover when we enquired about the album!
From Cafe Samovar, we headed to the Chhatrapati Shivaji Maharaj Vastu Sangrahalaya, formerly The Prince of Wales Museum (strangely, an internet search turns up a large number of hits for Chhatrapati Shivaji Maharaj Sastu Sangrahalaya!) Surprisingly, the museum attracts a large number of visitors, from within and outside Mumbai. The visit began on a high note, munching on slices of kandmool - a juicy tuber supposed to be good for digestion.
The museum authorities permit use of a camera, without flash ofcourse, on payment of a small fee. Unfortunately, we had not carried the camera, hence, no interesting images from the visit. The museum building has an imposing facade: set in the Indo-Saracenic style, the structure draws from Islamic and Deccan styles.  The structure itself would be an object of study for architecture enthusiasts.
The teeming crowds actually surprised us - who would expect Mumbaites to turn up at a museum on a sunday, rather than some mall!  Anyways, it turned out that most of the visitors were tourists from other cities - Chennai, Kerala, AP, Rajasthan, UP etc., The excitement of the crowds was palpable!
Interestingly, a significant part of the collection is donated by Sir Ratan Tata (son of Jamsetji Tata), his wife Lady Navajbai Tata and brother Sir Dorab Tata.  Many artefacts donated by the family are priceless: jade artefacts, antique furniture, jewelry, sculptures - there's something from the family in every section of the museum.  In fact, it is surprising that the museum was originally called The Prince of Wales Museum and not The Sir Ratan Tata Museum!  Yet another example of the Tata family's selflessness in  service of the greater public good.
The audio guides available for Rs 100 give a pretty useful introduction, though we found the explanations for the sculpture section (dominated by mythological themes) fairly basic.  The central hall, formed by the cavernous dome, is awe inspiring.  The dome itself is inspired by the Gol Gumbaz of Bijapur - probably the largest free standing dome in the world.  The ground floor has an eclectic collection of jade figurines, ivory sculptures, jewelry and an entire section devoted to ancient sculptures, that easily took most of our attention and time.

The sculpture section
This houses sculptures from various Indian temple sites as ancient as  200 BC to as recent as 1600 AD.  For the mythologically and historically inclined, like us, this is a treasure trove.  What it lacks in quantity, it more than makes up in variety.  Spending more than an hour browsing the collection, we made a few startling observations.  For instance, most of the scupltures of the feminine, be it goddesses or dwarpalikas, upto almost the 15th century, are portrayed with a yagnopaveetam, the sacred thread.  Though it is a known fact that the scriptures nowhere prohibit women from chanting the Gayatri or undergoing the thread ceremony, the recentness of the depiction was surprising.  A couple of artefacts were wrongly labelled and we did have a good mind to speak to the curataor, but by the time were done with the exhibits, exhaustion overtook us and forgot about it.  One of the exhibits that caught our attention was a life size Durga made entirely of dried plantain bark.  The featuring and attention to detail was spell binding.
The central hall houses several smaller artefacts and trinkets, of which the jade collection was the best.  Carved jade cups so delicate that they are translucent, jade jewelry, carved jade boxes and keepsakes... one can spend the rest of the day gazing at these.  There are carvings of ivory and wood, mostly Goan, at this level too, but none can match the breathtaking beauty of the jade word.

The first floor several sections - an extensive collection of Indian miniature paintings, one of the largest collections of Indian coins, and an assortment of arms and armour, various wooden and ivory artefacts.
The collection of miniature paintings is very extensive and showcases the different styles prevalent in various regions of the country.  We quickly moved to the coins section.  The history of coinage is traced with specimen from each phase.  There are coins from the pre-Mauryan period, through the various dynasties across India and right up to the 'Company' issued coins of the 18th and 19th centuries.  We were already running short on time and hence couldn't spend enough time here - probably another visit dedicated just to this section.
Exquisitely carved wooden and ivory furniture are placed all over the first level.  Most of these feature delicate filigree work as well as inlay work in metal and semi-precious stones.  Most are donated by the Sir Ratan Tata family.
The section on European and contemporary art was closed for renovation and was sadly, out of bounds.
It was nearing closing time and we decided to make a dash of the natural history section.  Though it was saddening to see magnificent animals killed and stuffed for display, two specimen caught our attention.  The first was an Indian rhino, in all its magnificent hulk, standing five feet tall toe to shoulder: never imagined that a rhino could be this huge.  The second was a bison that M found immensely handsome and dashing - I had to agree.  Though only a display, the bison had the calm commanding look that women swoon for, helped in no small measure by the huge bulk of atleast six foot tall.
It was now officially closing time and the guards started herding the laggards out.  We made a quick stop at the museum bookstore and picked up a couple of books on the Indus Valley civilization and ancient Indian coinage.

It was almost six in the evening and we were ravenous, the small Samovar lunch long since digested.  Headed to Delhi Durbar for a hearty meal, which turned to be not a great experience.  Un-responsive staff, slow service, dysfunctional AC were only a few of the complaints.  A quick repast later, we headed back home.  Surely, there is more to Mumbai than just her malls and shopping high streets....