Got this excellent shot of M, probably my best portrait shot to date and certainly the slowest shot without tripod that I have taken.  Yes, this is a half second exposure shot with bare hands, no tripod, no monopod, no support of any sort for the camera!  First the shot and then the story behind the shot... 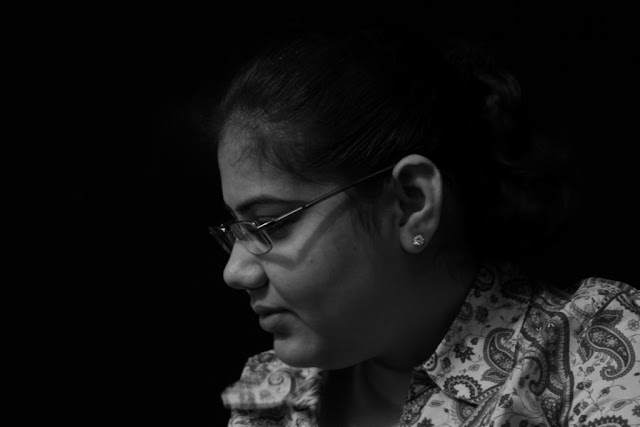 The setting
Unlike other years, spent this diwali in Mumbai.  On a whim, decided to head to Nariman Point on the last day of diwali to enjoy what we expected would be a spectacular display of fireworks all over the Queen's Necklace.  We arrived a tad too early and spent the first couple of hours soaking in the cool sea breeze and panoramic views of the Queen's Necklace, lighted up in all its festive finery.  A brightly lit up Saifee Hospital was the shining pendant to the glittering necklace.  Spent time munching on the famous Mumbai sandwiches and clicking shots of Nariman Point and the fireworks around.  The white glow of the sparklers and flower pots provided just the necessary soft lighting with the dark sea as the background for the perfect portrait.  The gentle breeze and randomly streaking rockets threatened to spoil the shot, but then, what's life without a little excitement!

The muse
The ever willing M ofcourse!  Since I didn't want a 'posed' look, just told her not to make any sudden movements, make only slow movements and that too in installments, so that I would get enough window to shoot a slow portrait.  M obliged, though at some discomfort, given how active and restless as she is!  Goofed up the first one by not setting the monochrome mode, but got it right in the second one!

The shot
Though I never expected it to turn out half as good, the result surprised me.  There were several challenges to start with.  The first problem was the light - it was nearing nine in the evening and there was a lot of stray light all over the place: from sparklers, rockets, blazing flower pots, headlights of passing vehicles and even from the streetlights.  Thankfully, managed a moment when all these had taken a break!  Next was the background.  Though we were at the far end of Nariman Point, just across from NCPA, the glittering lights of the curve of the Queen's Necklace threatened to play spoilsport.  Managed to find a spot with M seated on the seawall and me standing on the bench a level below, to get the right angle and have any afterglow of the Queen's Necklace below the range of the lens.  Luck played a large part, in not sending any stray rockets to the background.  The third and the biggest problem was the shutter speed.  Earlier shots in aperture priority resulted in 5 - 10 second exposures, which are impossible without a tripod and certainly a disaster as far as portraits are concerned.  Had to set a relatively high ISO (against my liking), at 800, beyond which I  believe the noise ruins photographs, particularly those with stark contrasts and dark backgrounds.  Set the aperture at 4.5 - alas I don't have a high speed lens and this is the widest I can open up to at even a 35 mm focus and shooting mode to Manual, to prevent the shutter from going off to long exposures.  Set the white balance to auto and shutter speed to 1/2 second.  I thought I was all set, but given the low light, AF failed to lock in and kept hunting.  Had to set the focus to Manual and had trouble getting an exact focus (the 18-55 is not the best of lenses for MF - I'd rather do that with a rangefinder, but the likes of Leica are currently  out of my budget range!).  That explains the soft focus, which actually is good for portraits!  The glow from the sparklers provided sufficient soft lighting and finally hit the shutter release.  Was lucky enough that my hands stayed steady for just the required moments and luckier further that the shot turned out decent enough...

If you liked the result, do post your comments.  If you didn't, I'd like to hear more about how the shot can be improved, so do post comments!
Posted by Ram Sharaph at 8:19 PM

Fantastic photo! Undisputedly one of your best! But do give some credit to the muse also, for not prancing around...afterall, this shot wouldn't have been what it is without her maintaining superhuman levels of tranquility!

I don't understand the technical details but what a lovely pic! :-)

Kalakals man!!! :)) And am surprised M had sooooo much patience.. heheh...