The world of small things - fun with macro photography

After attending the Canon basic photography workshop yesterday, was raring to have a go with the camera today.  A lazy afternoon, with M away and I was looking for things to photograph.  Stepping out was ruled out - didn't want to take that chance on the 10th day of Ganapati, what with visarjan crowds thronging the streets!

It's been four months since I got the camera, though haven't used it much.  The last couple of weeks, have been trying to take as many practice shots as possible.  Did the same today, though being confined within the house limited the options.  That is when I chanced upon a lone apple in the refrigerator.

Photographing it posed several challenges; first, there were different sources of direct and reflected light in the room.  Then there was clutter everywhere.  Third, I didn't have anything to prop the apple on!  Decided to set up a makeshift studio: hung an old dhoti over the window to diffuse the direct sunlight, pulled a black chair and draped another old dhoti to camouflage the black cushion and provide good contrast (red on white).  The white cloth would also reflect the light off the flash, thus reducing the effect of harsh shadows.  Pulled out the tripod for good effect (currently am making do with SLIK, hope to progress to a Manfrotto someday) and I was set.  Got some neat shots of the apple...  Increased saturation in the first snap, but decided to leave the other two untouched, for the natural effect... 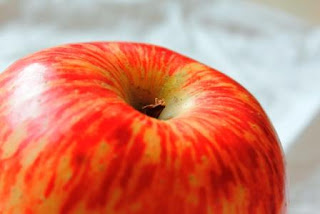 Love the angle of this shot... The out of focus front half and out of focus background, with the light shining off the side adds to the effect.  Increased saturation to bring out the colours... 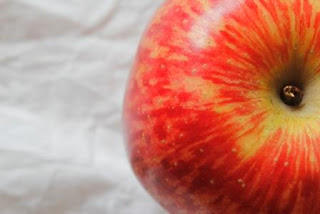 More experimentation here... have gone against the rule of thirds, splitting the frame into two and dedicating one half each to the subject and the background.  The composition turned out interesting results... No post processing here, not even crop. 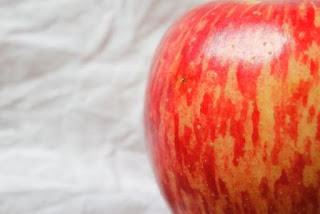 Repeated the same half-half composition here, with a side view.  Though not as dramatic as the previous one, this nevertheless gave an interesting shot.

After the shoot, rewarded myself the apple; the fructose and carbs acted on me and I set out finding other things to shoot.  Shot a bottle of coffee powder and honey; the results were not satisfactory - too many reflections from various sources of light - have to get that polarising filter soon.

I was still not done.  Picked up a dismantled CD-ROM player and decided to shoot the interesting electronics and small parts.  Here are the results:

This is a line up of tiny screws from the player.  Notice the one rupee coin on the left side to get an idea of how tiny these are... 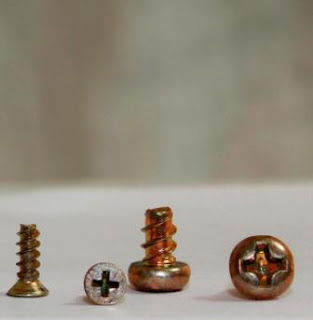 Here is a larger blown up view of the first four fellows: the one on the left would not be more than 3 - 4 mm tall.

A couple of views of the circuit board and the mechanism that moves the CD: 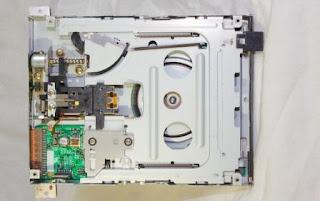 The non-cropped view - the CD player in its entirety with the innards exposed.  The whole thing is about 4 - 5 inches across. 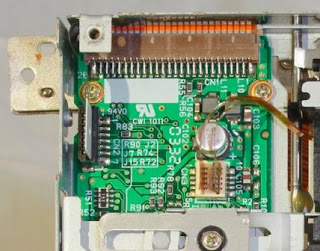 The circuits and IC's blown up (the little green square in the bottom left corner of the previous image).  This bit is only slightly larger than a one rupee coin. 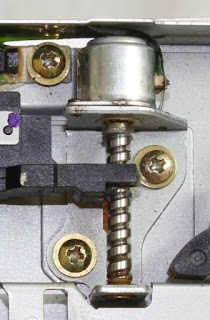 This is the mechanism that moves the 'reader'  back and forth.  The stub on top is a tiny micro motor, no more than a centimeter in length.

Hope to move outdoors soon, once the rains subside and get more pictures...

First picture of the apple is GREAT!...And hope you cleared up all the mess :P
Luv,
M

Love the one of the apple in the 1st one and then the one with the array of screws.. damn neat :)