Valley of the Gods

Rightfully has Himachal been described as the Valley of the Gods. The clean air, the clear waters, the breathtaking views of snow capped peaks... Truly, this is paradise on earth. After spending a day in Chandigarh, we proceeded to our destination, Manali. Armed with bagfuls of warm clothing (compared with the 40 plus of Mumbai, anything southwards of 30 degrees warrants a sweater), we undertook the overnight trip to the place of Manu.
Manali in the morning was cold (10 degrees I suppose) though our driver complained that it hadn't snowed in town this year and the resort, which is a few kilometers away from town did not receive the usual three feet of snowfall! Three feet? Gosh! For someone who hasn't ever seen snow, even one inch will make my day! Set away from the bustle of Manali town (thankfully!), our resort, Sarthak Resorts, is perched IN the Beas valley. Though basic, the lodgings were cosy and comfortable. The best part was the view from the balcony... the private balcony opened up into the vally, with a commanding view of apple orchards (foreground, not yet in bloom), the Beas river and the Pir Panjal range. I could sit here watching the mountains all day! 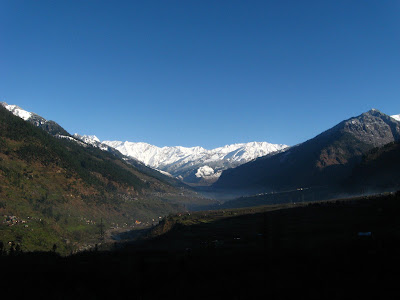 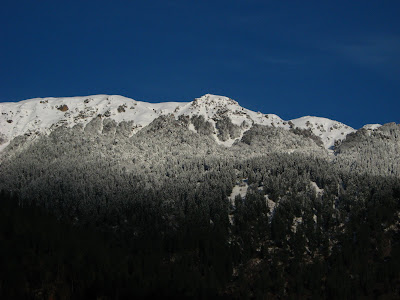 Treated to hot and tasty aloo parathas, pooris and aloo bhaji by the very hospitable Narender, we headed to explore the countryside on foot. There is not really much in Manali for the sightseeing tourist: there is Jagatsukh - an ancient temple of Lord Shiva believed to be worshipped by the Pandavas, Arjun Gufa - where Arjun meditated upon Lord Shiva and obtained the Pashupatastra, though the place is now buried deep under a landslide, Nehru Kund - a natural spring from which Nehru drank water, though this place was destroyed by a landslide a few years ago. Then there is Vashisht Kund (not buried under any landslide) and Manu Temple (it is believed that at the end of Pralay, Manu first disembarked at this place, hence the name Manali). There is also the Manali market where traders will pester you with deals for Chingu and Chamanga. More about Chingu and Chamanga is a different post. The market is quaint, selling dry fruits, warm clothing, souvenirs, trinkets and other touristy stuff. 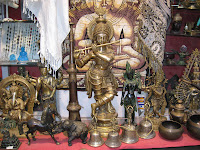 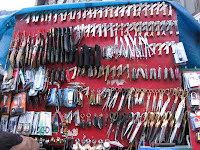 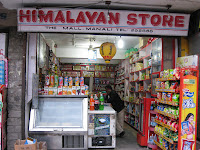 There is also the Hadimba Mandir, the place where Hadimba, Bhim's wife 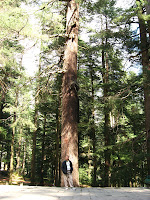 dwelled. The gargantuan deodhars led us to believe that giants did live here in the hazy past. At well nearly 150 feet, these conifers lorded over everything else. For the local outing, we tried all modes of transport: walking, local bus (that was swell, with one old gent remembering his son after looking at me!), hired motorcycle (believe me, all my biking skills were put to test), paddle boat, and even a yak!
We spent one day in the snow (though we had to drive for over an hour to reach the spot that had enough snow to frolic in), guided by the affable Pinkah and concerned Rudra. We spent so many hours in the snow that Pinkah, our driver, thought we had fallen off into a chasm and came looking for us! The sheer excitement of the place (and some well intentioned thermals) numbed us to the sub-zero temperatures. Our local guide Rudra turned out to be a brilliant photographer in his own right. A few masterpieces he clicked: M pasting me with a snowball and me ducking another... 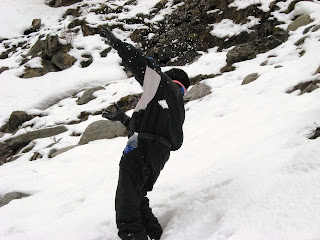 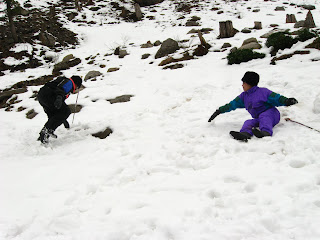 We had a swell time, skiing (falling all over more than skiing), sliding in the snow, throwing snowballs at each other. In the process, we managed to get snow inside the gumboots and gloves and by mid afternoon, we were freezing. An enterprising local (god bless his soul), was selling hot Maggi noodles and tea. Though overpriced (Rs 40 for a pack), they were a life saver. It had started snowing and with snow in our boots, we were freezing. The temperature was cold enough to freeze water in a bowl and we had to drink tea straight off the kettle (no kidding!) to get the life back in our limbs!
That was one fun day! We also had days cooped up in the room, due to pouring rain and a day spent in the company of Parbati - M and I fell in love with her... More about that later!
Posted by Ram Sharaph at 8:34 PM

Nice... do put up more pics or mail the link to meeeeeeeeeeee :D